Skip to content
Colorpoint Shorthair is the name the Cat Fanciers Association (CFA), a United States breed association, uses to refer to pointed cats of Siamese ancestry and type in colors other than the four “traditional” Siamese colors (seal, chocolate, blue, and lilac point). This name is also given to cats of Siamese ancestry in the four recognized colors whose eight generation pedigree show ancestors with other colors. In registries of other countries, however, “Colorpoint (or “Colourpoint”) is the name given to cats of Persian type and pointed coloring, as in Himalayans. 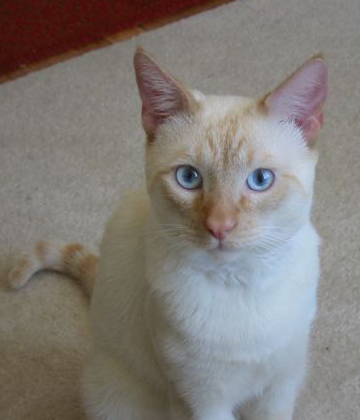 Colorpoint. …not a breed in its own right but part of the Siamese breed
In the CFA, a Colorpoint Shorthair cat may also be any of the four traditional Siamese colors; however, they may only be shown in the red point (also called flame point in Persian Family) or cream point, or any of the above colors in tabby point (also called lynx point) or tortoiseshell point. In all registries except CFA, the Colorpoint Shorthair is not considered a separate breed but is included in the Siamese breed.