Skip to content
News first Released in December 2006 The world’s first cloned cat just became a mother – and she even did it without test tubes. 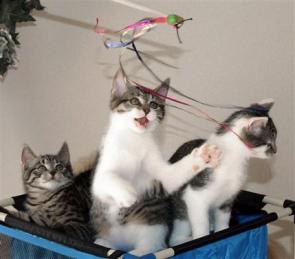 This photo released by the Texas A&M University’s College of Veterinary Medicine and Biomedical Science shows the three kittens Wednesday, Dec. 13, 2006, that were born in September to the world’s first cloned cat. Two of the kittens take after their mother, while the third, left, has a gray coat like his father. (AP Photo/Texas A&M University, Larry Wadsworth)
Copy Cat, who was cloned by Texas A&M University researchers in 2001, had three kittens in September 2006. Mother and kittens are doing well, said Duane Kraemer, an A&M veterinary medicine professor who helped clone her and has been taking care of her since.