Skip to content
Gingerbread was our beloved Ginger moggy whose main hobbies were sleeping and being given copious amounts of fuss. Gingerbread came from the Cat Protection League with a warning that he was not to be placed with other cats or children. However he turned into a big softie who tolerated children well. Unfortunately, he didn’t always tolerate other cats in the neighbourhood and was very territorial. 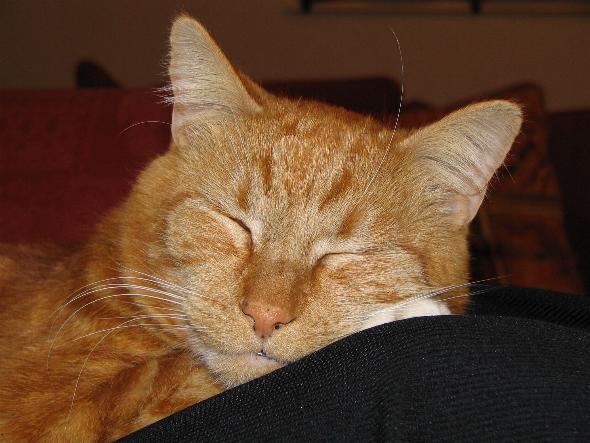 Ah, Peace at last
Mornings found Gingerbread walking around the perimeters of the garden like a security guard, albeit a strange one, marking out his patch on selected bushes and posts. A stranger in the garden would mean action stations and Ginger’s would give as good as he got! After the scrap or skirmish (and is the other mog didn’t back down) he would arrive at the door licking his paw and wiping his mauled face or back end. Consequently Gingerbread cost us a fortune in vets bills to treat these post-fight injuries.

As to recouping, Ginger’s would sleep for hours (like most cat’s I guess) saving his energy for the battle to be. But when he curled up on you (just like in the photo) it was all worth it! Goodbye our faithful and happy friend.