Skip to content
A poorly cat who was plagued by hay fever has been given a special inhaler after a rape field was planted next to his home. 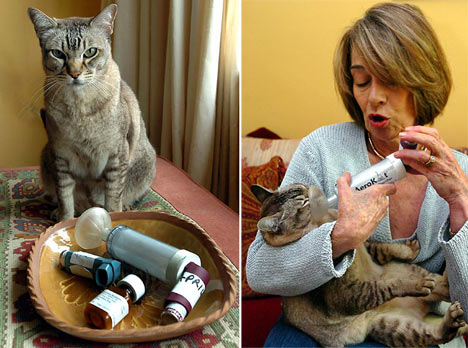 Bruno the cat with his special inhaler and owner Anna Dickie
Bruno, who suffers from asthma, nearly died after he succumbed to the wheezing and spluttering that plagues millions of humans during the summer months.Owner Anna Dickie noticed her moggie’s asthma became unbearable when he was exposed to the bright yellow rape crop which popped up near to their home in Cavendish near Sudbury, Suffolk. The worried animal lover took Bruno, an Asian ticked tabby, to specialist vets to try to put an end to his suffering.She said: “It is quite rare but my asthmatic cat is particularly affected by the horrid rape crop. He developed breathing problems and was diagnosed with asthma last year after we took him to specialists in Newmarket. He was close to dying and spent several days in intensive care because of his asthma.”The vets gave the moggy steroids and a puffer but his condition deteriorated when he came into contact with the fields of yellow flowers.Mrs Dickie said: “He was given daily steroids and a puffer which seemed to get it under control but since we had a rape field planted directly adjacent to our home, he has got a lot worse.”The experts suggested Bruno use a specially adapted inhaler – just like human sufferers do – to try to ease his snuffles. Mrs Dickie now has to administer the drugs through the special puffer which fits over her cat’s mouth.Admitting she was sceptical at first, the devoted owner said the inhaler has eased Bruno’s hayfever.She said: “We had to experiment with using the puffer at first although it looks just like a human inhaler.“It has a plastic tube fitted to the mouthpiece which allows the spray to go directly into Bruno. He has breathing problems and gets choked up and starts wheezing. It is not very nice at all.“He wasn’t very keen at first, but he is now very good at taking it.”Although pets are usually blamed for causing allergies with their shedding fur, feline asthma affects one in 200 cats. Symptoms include coughing wheezing and difficulty breathing.Experts now believe human lifestyles, such as smoking, dusty houses, pollen, human dandruff and even some types of cat litter, can contribute to cat asthma.Report in the Daily Mail 9th May 2007