Skip to content
Moggy or moggie (plural moggies) is a British affectionate term for a domestic cat, but is also used as alternative name for a mongrel or mixed-breed cat whose ancestry and pedigree are unknown or only partially known. Because of this mixed ancestry and free-breeding, a moggy can either be very healthy, or, if from an inbred feral colony, genetically unsound and sickly. However, as feral colonies are often left without any form of human intervention and veterinary attention, the sickly generally do not live past kittenhood, leaving the colony as a whole healthy. 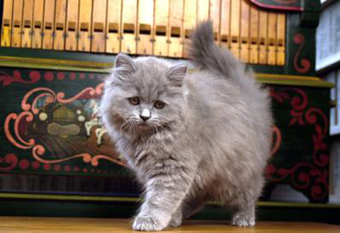 Etymology The origin of the word moggy is not a corruption of the word ‘mongrel’, as many believe. It was first recorded in 1911, and was possibly derived from maggie, margie or mog, all short forms of the female name Margaret. It is thought this was first used to describe an ungainly lumbering old cow, and it may even have been a minor rural English name for any cow; since ‘moggy’ was used in several 1800s English dialects as an ‘affectionate name’ for a cow. As rural people flocked to the cities during the latter part of the Industrial Revolution, it seems likely that the cow moggy became maggie, applied as a term of abuse for a dishevelled old woman or ‘woman of the street’.The origin is obviously confused, but as the early 20th century streets of London became filled with very many unhealthy looking stray cats, it would have been natural to apply the term moggy to describe these unfortunate creatures.In parts of Lancashire, England the word ‘moggy’ means mouse not cat. A cat was known as ‘the moggy catcher’. It has been suggested that this could be the etymology of the word moggy meaning ‘cat’ – over time the catcher part was dropped from ‘the moggy catcher’ and so moggy now means both ‘mouse’ and ‘cat’.Thanks Wikipedia, the free encyclopedia 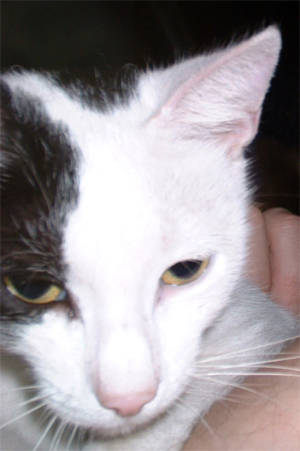 Pirate ~ so named because of his eye patch.
Hi folks, Here’s pirate, our faithful friend and cat of three years. Not only does he have an eye patch but also walks with a limp (just like Long John Silver). How he got that we’ve no idea.Lovely calm creature who only gets troublesome around meal times, which is pretty normal for a cat I guess. The rest of the time spent sleeping in his favourite chair or under the rhodedendron bush. Well thats about it for now.Alex.

The European lynx is cat-like in appearance but is much larger than a domestic cat at just over 1m in length and weighing between 30 – 40Kg. They have a very short tail and ear tufts with a grey-brown spotted coat. 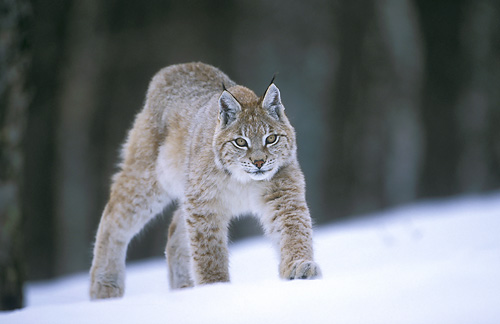 The European Lynx
The European Lynx live mainly in pine forests and mountain areas of northern Europe. They are solitary animals and have a large home territory which the mark and defend from other Lynx in the area. Their main prey are roe deer, hares and rabbits. Sometimes they will eat sheep. An adult lynx eats on average 1-2 kg of meat a day.Unfortunately there are no longer any Lynx in Britain (other than in Zoos). They lived here about 1,000 years ago but became extinct probably due to hunting and loss of habitat.Lynx mating takes place between February to April with usually 2 -3 young born 10 weeks later. The mother cares for and feeds her kittens on her own with no help from the father. Young lynx live with their mother until about ten months old and then move away. Most adults live for around 4 – 5 years but survivors can reach 17 years of age.Some more facts about European Lynx:

Link to one of many Lynx websites

…I like this Tom and Jerry stuff… It’s :crazy:

And if it’s late and you’re feeling peckish…. Here’s the midnight snack…

Tom and Jerry The Midnight Snack from rajesh on Vimeo.

Hi reader, Norman reporting..Well I really went and did it this time. Had my morning bowl and went out for a stretch. Just patrolling my boundary on Friday morning with a bit of scent marking here and there and along comes this fur ball monster of a puss. Noses out from under the fence he does. I was duty bound to protect my territory and wasn’t going to let him step on my ground for a minute. Sadly I knew I was doomed from the start. In seconds Claw and Fur were flying and I didn’t feel it at first. I saw him off alright but suspect he just went home for his breakfast as I was an easy target for the brute. I’m a bit nervous now of that patch of dirt by the fence in case his face appears there again. And for my bravery I have a half inch slash across my forehead which is claw deep…and what’s worse a further result was….well see for yourself. 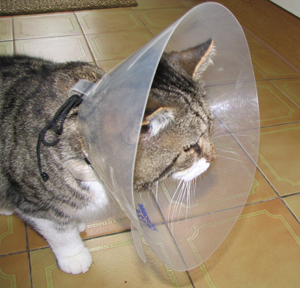 Me in my medical Ruff. Stops me licking the wound.
My owner took this photo to prove the battle was indeed real. And the Ruff..well you see I just cant keep from licking my wound so I’m now trussed up like Mary Queen of Cats.Hope you like my tale, so..until the next time…Ciao,Norm.